On this page you'll see a listing of providers from which you can buy NBA2K18 MT. This overview not only includes the NBA 2K18 MT prices of every shop, but also a customer rating. Shops listed as trusted sellers have a proven track record and are usually safe to buy from.

NBA 2K18 is a basketball simulation game and the 19th instalment of the NBA 2K franchise, based on the American National Basketball Association (NBA) sport. The video game is set for release in September of 2017. Simulating the basketball experience, players have a choice of several gameplay modes, including an option to customise an individual basketball player and follow them through their NBA career. Other modes include franchise and team modes, where the players control an entire organisation or compete against other teams in the Association. As the sequel to the previously successful NBA 2K17 video game, 2K18 features some revisions, upgrades and special features, including pre-order deals which give the player access to free items. As well as the standard edition of the game, a Legend Edition will offer the player 100,000 VC (Virtual Currency) and a host of in-game items, whilst the Legend Edition Gold will offer the player 250,000 VC for in-game spending. VC can be bought elsewhere separately at far greater cost than each new edition's offer.

VC is not the only available in-store currency. MT coins can be used in the NBA 2K game franchise for buying players, packs and items in the MyTeam mode. As a currency item used for in-game purchases, there is a signifiant trade in MT within the online community. Aside from achieving MT from in-game progress such as levelling up and succeeding at set challenges, numerous sites have emerged selling MT for real world money, facilitating an out-of-game market in virtual currency. Although there is little in the way to prevent the purchase of MT, the game developersâ€”Take-Two Interactiveâ€”have addressed some of the illegality of purchasing MT and began banning accounts that are flagrantly abusing the system.

As a result, sellers have taken on increasingly protective measures to trade in MT, including using the in-game "auction" method to mask the purchase as a normal account-to-account trade. Take-Two still proscribe such activity, so it is a risk each player takes. For example, the systems looks at the trade of in-game players and their pricing. If a low level player is sold for upwards of 100k (a common attribute of the "auction" method of trading MT) then the system can trace and record such trade automatically. If this is repeated enough times, the system can issue a red flag, resulting either in an immediate ban or someone looking into the accounts in question. Given these risks, MT must be traded carefully.

Although Take-Two Interactive have made vocal their disapproval of MT trading, some players do not want to invest the significant time and energy into the in-game acquisition of MT, specifically given that players consistently argue that MT becomes increasingly difficult to obtain in-game with each new series title. In looking for MT on the market, it is important to look carefully at the sites selling it to avoid any potential fraudulent activity which Take-Two Interactive are not accountable for. The price for purchasing MT by a third party market is variable and deals are frequently available. Seller must be carefully picked.

Expected and Top Features in NBA2K18

Submitted by Brandy on 2017-07-13 12:20
NBA2K18 is due for release on September 19th this year and going by some of the details from 2k Sports, Nintendo and commentaries from the cover athletes; it is something that gamers should look forward to. From the cover art and athletes to the hinted features across the various editions, NBA2K18 is really going to cause a stir among NBA fans and gamers who have been playing previous games in the series. This new release is expected to outdo its predecessors in all parameters.

Kyrie Irving of Cleveland Cavaliers will be the games standard edition cover athlete. The celebrated point guard gracing the cover of the game is something that has already excited gamers. The face of the NBA2K18 Legend Edition is the Hall of Fame superstar Shaquille O’Neal, popularly known as Shaq.

Apart from these two cover athletes, the three times NBA All-Star DeMar DeRazon who is a shooting guard for Toronto Raptors will be the face of the game in Canada. This is the first time the series is featuring a Canadian athlete on its covers.

This is the first installment in the series to feature a platform for the newly released Nintendo Switch. Gamers who are already using this hybrid console can brace themselves for the ultimate NBA gaming experience with NBA2K18. The game will also be available for PS4, PS3, Microsoft Windows, Xbox 360 and Xbox One. 2K sports are also expected to release the game for Android and iPhone users but the release date is unknown. The cover details and features of these versions are also expected to be released later.

The official date of release is September 19th across all platforms but gamers can make pre-orders and get it four days earlier, on September 15th. This Early Tip-Off Edition is fully unlocked and is available for both digital and hard copies. All game modes will be available for gamers and there are no limitations on how long you can play. It is available for PS4, PS3, Xbox360, Xbox One and Nintendo Switch.

NBA2K17 has been the best basketball game for visual game lovers until now, and NBA2K18 is bound to be even better. According to 2K, the game comes with outstanding and distinct visuals and presentations. These visuals are bound to enhance the player’s experience by making it more realistic, with better animations, motion and sharp venues. The installment will have actual roasters and precise as well as new statistics for every player. Gamers will also be able to decide whether their team of choice will play competitively in a series of modes or opt to play as single players. The single-player gaming experience is upgraded since you can compete to be the best among other best players. The overall gameplay is a notch higher than in previous series.

The game will also feature new game modes such as The One, alongside the existing and now modified MyCareer, MyGM, MyLeague and MyTeam modes. With MyCareer mode for instance, players are accorded the privilege of creating their own MyPlayer and writing their own story. This will help them develop their personal NBA careers. Using MyTeam they will be able to put up their dream all star team using new types of cards. They will also be able to control either the whole league or just a part of the NBA through a franchise. 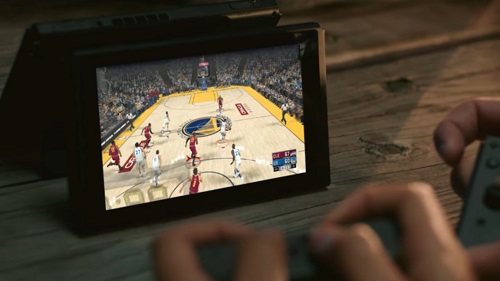 More additional features are bound to be released soon but before then there is a lot of speculation and expectation from gamers. There is the hope that the version is going to include a new Moments Mode that will enable players remake their favourite star’s moments. Players are also expecting that this edition will give them more customization options across all the game modes.

With NBA2K17 for example, gamers can design their team’s outfit and upload their creations for other players to use using MyLeague mode. This has been one of the best experiences for players so far but we hope the uploading option will be available for other modes as well such as MyTeam. The availability of unlocked legends in other modes such as MyLeague and MyGm would also be great for players. We hope that this time 2K will consider offline gamers as well and give them the option to create their MyPlayer for offline use. The offline MyPlayer should come with less restrictions than their online counterparts since they are not meant for competitive purposes.

The inclusion of interviews after matches could also be a great feature for the game and it would make it more involving for gamers. Other features could include more badges for players, better and more realistic defence tactics as well as some new additional features touching on fouls. Also, we hope that the developers will look into the sometimes lagging engine and upgrade it for this installment.