World of Warcraft newest expansion, the Legion, bring the whole new content to the Azeroth called the Broken Isles. Since it is full of dangerous monster, the Broken Isles is only suitable for a player having at least a level 100 character. If not, a high-level gear is necessary.

There are several ways to make a handful the World of Warcraft Gold in The Broken Isles. This article is going to talk about one of the most effective methods: mining. The best spot so far is located in Surama, in a cave area on the top left-hand corner of the map.

The area around the cave is full of several mining sports making it is pretty easy to mine a significant amount of ores within a short period of time. Mining nodes can be found both inside, outside, and even on the top of the cave which is a mountainous area. There are also several mining nodes in a stream nearby. 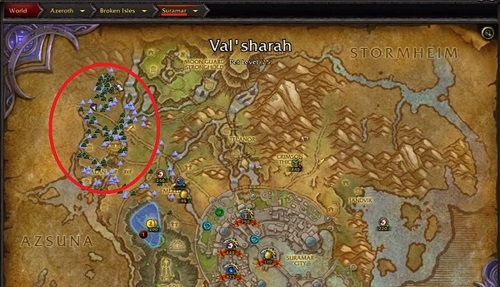 A player can gather two types of ore in this place. The first one is Felslate ore. It is sold at a very high price and found regularly from these mining spots. A more common ore yet sold at a good price, Leystone, can be found here as well. Because of this, it is no doubt that this location is the best mining spot so far in the World of Warcraft.

However, it only works with two conditions: a player need to purchase the Legion expansion and have a powerful character. Enemies around here are quite strong considering that the mightiest monsters live here at present.

Making World of Warcraft Gold through mining is notably better than in the past. Mining nodes are no longer shared with other players. In the past, if somebody else mines them before you, they will be gone. However, these mining nodes are now personal. Even if other players on your server are mining in the same location, it will not be a problem at all.

The first one is GatherMate2. It automatically updates a mining location, including herbs, finishing, gas clouds and so on, to the world as well as a mini map after a player gathers that node. In addition, a module containing all gathering locations is also available. As soon as the addon and module are installed, a player should be able to see every mining and gathering locations available and can start making gold right away.

Although Server Hop was nerfed significantly a few months ago, it is still proven effective when used correctly. In the past, a player could join an auto-invite group and transfer to the party’s leader server automatically. Monsters and mining nodes data will be reset at the same time allowing a player to start another round of gathering without having to wait for the respawn time.

After it is nerfed, a player can join an auto-invite group and transfer to a new server ONLY IF the party leader is nearby. A player needs to be literately in the same zone as the party leader, which is the Broken Isles in this case. Fortunately, a lot of people will be grinding and farming in this location making it is still easy to join a group and move to a new server.

The best time to use the server hop addon is during peak hours when many players are playing the game. A player should also be nearby the cave area as well.

The best way to sell Leystone and Felstate for the most profit is through an auction house. Auctionator makes whole process quicker especially in posting and managing items.

Auctionator is optional, though. In case a player is familiar with a normal auction house function, there is no need to install this addon.

There is a new enchant called “Legion Mining”. It is located under “Legion Enchanting” >> “Glove Enchantments”. The enchantment can increase the speed of mining in the Broken Isles. It literately reduces time to mine minerals.

Chief Telemancer Oceleth is standing in the base camp of Surama. His buff increases 50% movement speed for 15 seconds after killing an enemy. It lasts for an hour and only works in the Surama area. The buff helps mining a lot faster because of mobs such as Nightmarish Grizzles that can be found all over the cave area. Getting 50% movement speed bonus for 15 seconds makes the whole mining process faster.

There are 3 mining ranks for Leystone/Felslate Deposit as followings:

Within a full hour of mining, a player should get around 440 Leystone and 160 Felslate. In addition, a player also obtains some cloths and trash items for a hundred of gold when sold.

Leystone and Felstate can only be obtained by mining. Because of this, they should hold their value pretty well in the long run. There might be a time that these two ores are over gathered making the price drops. However, their price should still be high especially Felstate. At the very least, a player should still make at least 8k Gold per hour from this strategy.

A player has a chance to receive the world quest “Brimstone Destroyer” in every 3 days of mining. It is an oversized inferno that drops 4-7 infernal brimstones. Each stone can be sold at around 500 each or around 2-3000 additional gold per quest. 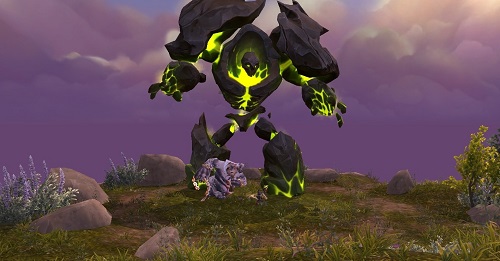