2016 is winding down in World of Warcraft, and the folks at Blizzard are making sure it goes out with a bang with a December chock-full of special events and week-long bonuses. Take a look at what you can be looking forward to in December of 2016:

The Arrival of the Darkmoon Faire

The month kicks off with the arrival of the Darkmoon Faire, gates open from December 4 until the 11th. Still one of the best places to get Heirloom gear, this month the Faire also has introduced a new water-based mount the Skipray, available for the cost of 500 Darkmoon Daggermaw. Break out those fishing lures and earn a new mount, or make a lot of money on the Auction House by selling your Daggermaw to those who can't be bothered to fish them up themselves!

PvP players will want to circle December 13 on their calendars: on that date Legion PvP Season 1 ends and Season 2 begins. PvP rewards (like titles and mounts) from Season 1 will be awarded within a couple of weeks of the transition. Also, transmoggers will want to note that the gear rewards from season 1 and 2 share the same appearance, so if you are missing a couple of pieces from the set, you will have the remainder of Season 2 to finish up your collection.

From December 6 through the 13th, strap on your PvP gear and prepare for the Battleground Bonus Event. During this event, all Honor rewards will be doubled, enabling you to fly up through the ranks and unlock those elusive higher-end Honor Talents! All the heaviest hitters will come out for this event, so prepare for some nail-biting finishes across the Battlegrounds.

Still need a couple Legion dungeons to complete your set of Pillars of Azshara? Make sure you sign up for the Legion Dungeon Event D from December 13-20. Each Legion dungeon's final boss will grant an extra drop, doubling your chances of finally getting that last piece of gear you needed to push your level over the top! If you are tired of endlessly waiting for PUGs to populate, this week is sure to be chock-full of activity in the Looking For Group tool, so act fast!

Hang up your stocking and leave some treats out during December 16 to January 2, as we celebrate the Feast of Winter Veil. Greatfather Winter will be arriving in Ironforge at the same time that Great-father Winter makes his appearance in Orgrimmar, surrounded by presents and treats from Smokywood Pastures. Quests are available too - everything from fetching milk and cookies to saving Winter Veil from the Grumpus! Fabulous prizes are available from the daily quests, including fabulous new outfits for 2016!

Make sure you visit the tree in Orgrimmar or Ironforge for your gifts during the Feast of Winter Veil, and block out your calendars for the events you want to participate in this month. Better yet, spend some time in each and every event, and welcome 2017 in with WoW-flavored enthusiasm! 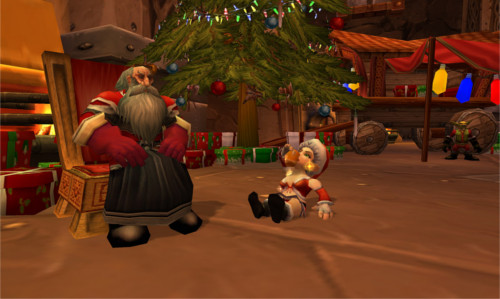 Pet Battlers, your time is coming at the end of the month, with the Pet Battle Bonus Event, starting December 20 and continuing through the 27th. This event doubles the amount of XP your pets earn via Pet Battles, giving you the perfect opportunity to level up all those great new pets that you have been amassing from Legion quest rewards. The bonus from the event stacks with other bonuses as well, so grab some +XP treats from your garrison, strap on your Safari Hat, and get to leveling up your expanded pet collection!

With the end of the year comes a look back to a decade ago, with a Timewalking Dungeon Event featuring dungeons from The Burning Crusade! From December 27 through January 2, 2017, experience the ultimate in nostalgia with a chance to run through the dungeons and raids from WoW's very first expansion, tuned for your Legion-level characters. From the Hellfire Ramparts to the Magister's Terrace, each and every dungeon from 2007's expansion will be available to be run through via Timewalking, with XP and gear rewards tuned for your most powerful characters.

If you do not have enough gold for these upcoming events, check these sites out!