Being totally clueless in a good game can be hard. You're always broke, still figuring out the game mechanics, and perpetually under-geared. There's nothing wrong with this- everyone was new and went through this at some point, with some exceptions that hold your hand, leaving you bouncing between exclamation marks while racing to the level cap.

Elder Scrolls Online is no exception. It won't hold your hand by giving big, bright exclamation marks to chase around the map while racing to the level cap. You're expected to explore, find opportunities, and actually play the game before max level.

Do you know that spending as low as $7 can give you more than 100k ESO gold in return? You can buy lots of item with this amount of gold that furthers increase your character strength to the next level. Check out our Elder Scrolls Online gold comparison page and find out which shop is currently offering the best price.

Thankfully, making gold isn't as hard as it seems. If you're absolutely stuck, these tips can get the gold train started.

The offline Elder Scrolls games (and the Fallout games created by Bethesda, which function as Elder Scrolls: Nuclear Wasteland Edition) are all about exploring the massive world around you. ESO attempts to bring this style of gaming to MMO players, and in the age of grinding to the cap, it's a lost art.

Quests generally provide enough gold to keep you geared as you level, if you can find them. Quest giving NPCs aren't pre-marked on your map, although they will be marked if you get near them. They're also not always in town- many quests are started from a dungeon, a major departure from the way most MMOs are designed these days. Go out into the wilds and explore (or if you prefer the easy way, find a list of quests and track them all down).

While ESO is free to play after purchasing the game, the developers still need to make money. The old $14.99 per month subscription fee can be spent on an ESO Plus membership. While it may feel like a pay-to-win cheat, you get a 10% bonus to any gold you acquire while you're an ESO Plus member (as well as a 10% bonus to experience, crafting experience, reduced recipe research times, and free in-game currency every month that can be spent on cosmetic items). 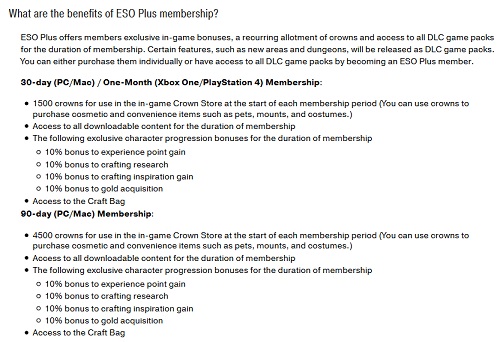 Save Money on Gear

Making money won't do you any good if it's spent by the time you get it. You'll need quality gear for any group activity like a dungeon raid, but it's cheaper to simply make do with what you can loot from enemies or craft yourself when soloing and save the powerful armor for special cases. This also saves on repair costs, as any gear that's about to break can be deconstructed into materials to sell or re-craft rather than spending gold to get it fixed.

In most games, crafting is a cash sink until you're able to use higher level recipes to make powerful endgame items, but that's not the case with ESO. Once your character reaches level 6, you can complete a simple certification quest. Two of these can be accepted at a time, but accepting a new quest after being certified will not negate any other certifications you've earned.

Once you're certified, you can accept one crafting writ once per day in that craft. The writs pay out "inspiration" (crafting experience) and materials for that craft. You can then use the materials to craft items for sale, or just sell the materials directly.

This is actually the most obvious method to anyone who has played an MMO- track down a source of materials crafters need and sell them to other players. The most common method is to fight monsters and sell the loot, which is used by virtually every MMO, although there will be other sources in the world like chests and other containers.

Crafting mats can also be gathered from resource nodes out in the wild. You have to beat other players to it, but if an area isn't heavily populated at the time it'll be easy to "farm" resources by gathering them. There's also an ability called "Keen Eyes" which makes nodes glow when you're nearby so it's easier to find the nodes. Once gathered, craft the materials into something useable or sell them off to other players.

The most unique option for resource gathering is theft. You can't steal from other players, but it is possible to steal items in the world or pick NPC pockets. It's a common source of income in offline Elder Scrolls games, and ESO wouldn't be a true part of the series without it. Unfortunately, stolen goods cannot be traded or sold to anyone besides an NPC fence.

A fence can launder your goods and remove the stolen icon, but crafting with stolen goods is an easier method that any player of Oblivion or Skyrim should remember. A great source of early gold in those games was breaking into a house, stealing all the food and other materials inside, and using alchemy (the only craft in Oblivion) or another craft to convert the stolen goods into a usable item like a potion.

In ESO, crafting with stolen materials still works, but players can also deconstruct stolen gear into materials. Any stolen armor or weapon can be deconstructed into clean materials, and it earns more crafting experience at the same time. If you do deconstruct stolen gear, be sure to take the Extraction skill in the appropriate craft to maximize your gains. Once you've produced a clean item or deconstructed gear into clean materials, they can be sold to other players for a profit, just like all the other gathering methods listed here. 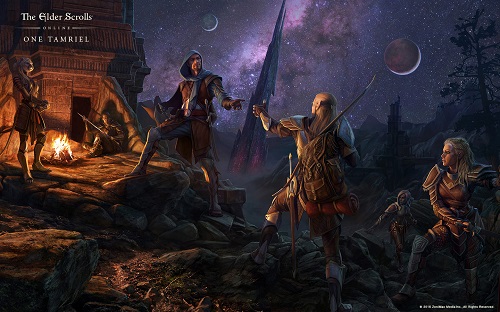 There's a special ability in each craft's skill tree that allows you to hire and upgrade a gatherer. Once these abilities are taken, you receive free materials in the mail from your hireling once or twice a day for each craft you've taken the trait in.

Each player can also make up to 8 characters for free in ESO, although more slots can be purchased with crowns (which normally cost real money). These extra character slots can be used to create characters specifically to take hireling traits, and the necessary skill points can be earned quickly by checking bookshelves in towns.

One word of caution: This system was originally thoroughly abused by the player base, so it did receive a nerf. Items received from hirelings now vary based on the character's craft skill, so any hireling alt you create should be trained in the appropriate craft for maximum benefit. The nerf makes hireling alts more of a late game gold source, although once leveled they're decent rewards for minimal effort.

This guide isn't comprehensive, just a starting point. Each method requires practice and effort to master. Once you get started and get familiar with these money making methods, the game will get easier and be more fun to play, so go explore and rake in that gold. And do not forget that you can also make an investment in buying ESO gold as well.