Since September is the end of quarter 3, many MMO games such as Blade and Soul, Elder Scrolls Online, Final Fantasy XIV, Guild Wars 2, and even the World of Warcraft launched their big patch updates/expansion in September or a few days before. These significantly impacted RMT market causing these in-game currencies price to be pretty fluctuated. For other games that did not have any change, their price is quite stable with less than 15% difference between the highest and the lowest price.

Elder Scrolls Online Gold price in RMT industry has fluctuated since June after the release of its newest expansion, the Dark Brotherhood. When the price started to be stable, a new patch update, Shadows of the Hist, was released in August shaking the in-game currency price again. And, again, when the price was becoming stable in September, another patch update “One Tamriel” is scheduled to release in the following month bringing a major change to the game exploration system. It caused an RMT price to rise again. Elder Scrolls Online Gold price should be quite expensive during the first 3 weeks of October and started to decline after that. The cheapest was on September 22, 2016, which is 50,000 Elder Scrolls Online Gold for $5.73 and the most expensive was on September 1, 2016, for $8.81. The decline was as great as 53.75%. 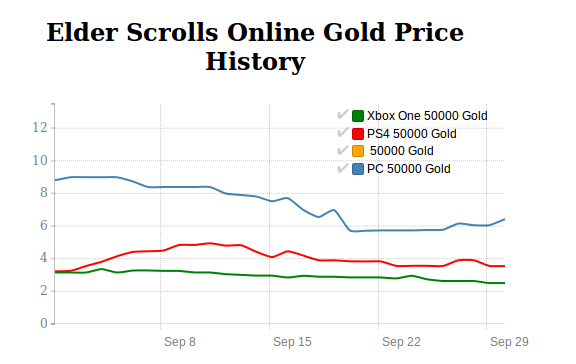 Final Fantasy XIV Gil price had fluctuated during the first week of September. It became very stable shortly after that staying in the range of $14.8 USD per 5m Gil until the third week. Because of the release of Patch 3.4 on September 26 coming with new main quests, side quests, features, and much more, FFXIV Gil price was on the rise again. Its highest point at, $19.35 USD, was close to 3 months ago during the last patch update. FFXIV Gil price has a chance to be even higher in October because of the Final Fantasy 2016 Fan Festival held during Oct 14-15 in Las Vegas. The cheapest was on September 05, 2016, which is 5mn FFXIV Gil for $11.87 and the most expensive was on September 30, 2016, for $19.35. The fluctuation rate was at 25.89%

Guild War 2 price had increased tremulously during the 3rd week of September due to its newest update “Rising Flames”. It is actually the second episode of the series bringing change to the whole world of Guild Wars 2 called Living World. Rising Flames is a part of season 3. Another reason for the rise of the in-game currency price was from the Guild Wars 2 World Championship which already had the winner a day before Rising Flames. These two major events should keep Guild War 2 Gold price high for a while. The cheapest was on September 10, 2016, which is 500 Guild Wars 2 Gold for $12.99 and the most expensive was on September 30, 2016, for $17.64. The increase is as high as 35.80% 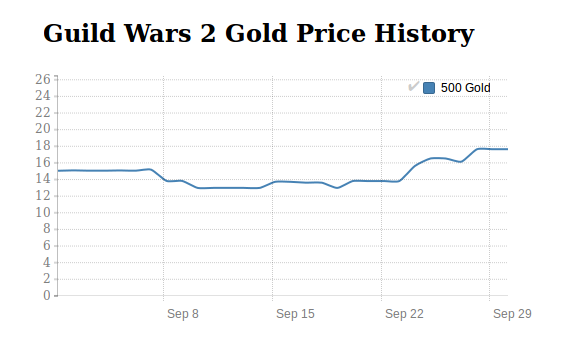 Unlike other major MMOs, Star Wars the Old Republic was very quiet in September. There was not a single game update except the announcement on PvP season 7 reward. Even the news related to the upcoming Knights of the Eternal Throne in Fall could not be found as well. Because of these, SWTOR US Credits price started to drop again. Unless there was an update on the Knights of the Eternal Throne, Star Wars the Old Republic Credits price should still be decreasing in October. The cheapest was on September 29, 2016, which is 10mn SWTOR US Credits for $5.65 and the most expensive was on September 3, 2016, for $6.55. It was a 15.93% drop.

Once again, En Masse added a new costume to Tera's in-game store, and this time, it was undergarment armors such as bras and underwears. In addition, the guild system was significantly improved with the introduction of “Guilded Age”. Looking at Tera Gold price history in September, its fluctuation rate was better than the previous month. However, a sudden 10% price change still happened throughout the month. Tera Gold price should be similar in October. The cheapest was on September 16, 2016, which is 20,000 Tera Gold for $25.16 and the most expensive was on September 26, 2016, for $27.96. It was a slight 11.13% fluctuation rate.

Surprisingly, the increasing World of Warcraft Gold price resulted from WoW's newest expansion, the Legion, only stayed for a few weeks. After it reached its peak on September 2 for $31.19 per 50k gold, the price started to decrease a few days later and stopped at the range of $25 USD for the same amount. However, the average price was still at least 20% higher than the previous month. In addition, there is an opportunity from the gold price to rise again because of the upcoming biggest annual Blizzard events, Blizzcon 2016 coming with World of Warcraft Arena World Championship. The cheapest was on September 28, 2016, which is 50,000 gold for $22.53 and the most expensive was on September 3, 2016, for $31.19. The decline rate was still as great as 38..44% 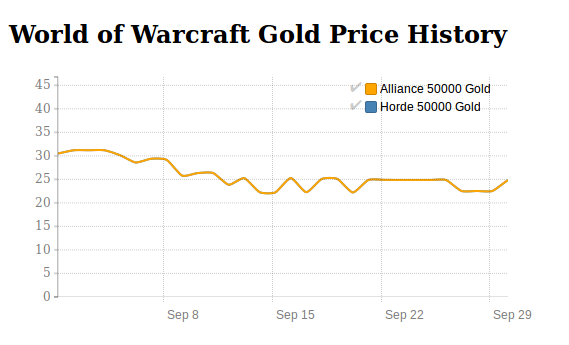